Rhodes, the island of the sun, the pearl of the Mediterranean, is of enormous interest both for its natural beauties and for its archaeological treasures. With its marvellous climate and excellent tourist infrastructure, it is suitable for holidays all year round.Miles of sandy and pebble beaches, picturesque harbours, a sea of impressive depth, deeply shaded valleys, green mountains, dazzling white villages, archaeological monuments and beautiful ruins from all periods of time are the main hallmarks of this beautiful island. Its capital, the magnificent medieval city of Rhodes, is the capital of the prefecture of the Dodecanese. Rhodes has been proclaimed as a monument of global heritage by UNESCO.

Rhodes Island lies in the south-eastern part of the Aegean Sea. It is the largest island of the Dodecanese Islands. Rhodes is 270 nautical miles from Piraeus and has an area of 1400 sq km and a length of 80 km.

Rhodes boasts on an average 300 days of sunshine per year. Its population today is approximately 115,000.

How To Get Here
By Air

A large number of airlines from several cities operate charter flights within the holiday period (April to late October) which fly direct to Rhodes.

Alternatively, if you are reaching Rhodes through Athens, there are many connecting flights daily, and the average flight time is approx. 45 minutes. Other domestic flights link Rhodes direct to Thessaloniki, Crete, Mykonos, Santorini, Karpathos and Kastellorizo (Megisti island).

If you prefer to travel by boat, Ferries to Rhodes leave regularly from the port of Piraeus (Athens) with an average journey time of 15 hours.

Discover The Island
What to See

The Medieval City of Rhodes and the Palace of Grand Masters within it. (World Heritage)

Around 55km from the Hotel, lies the Medieval Town of Rhodes (know as the Old Town).

Simply fascinating, the old town carries twenty four centuries of history and is the largest living medieval town in Europe. Over 5000 habitants live and work in the same buildings in which the Knights of St. John lived six centuries ago.

This is where Medieval walls, the Palace of the Grand Masters, the Street of the Knights, Mosques and water fountains, Byzantine and Gothic Churches blend perfectly with bustling shops, restaurants and cafeterias. Thousands of fascinated tourists wonder around the streets of the old town all day long. Life continues in the streets of the old town (mainly Sokratous st) even till late at night where night bars are packed mainly by locals and Italians.

Valley of the Butterflies

Arguably the most attractive natural destination on the island, home to the Panaxia butterfly (Quadripunctaria Poda), the Valley of the Butterflies (Petaloudes) lies around 50km from Lindos Breeze Beach Hotel. Close to the village of Theologos (Tholos). From late July to early September, thousands of butterflies overwhelm the valley in order to reproduce. Despite the fact that the number of butterflies declines as the years go by (due to a number of reasons including tourist disturbance) the valley of the butterflies remains a remarkable site one should not miss when visiting the island of Rhodes.

Recently restructured to resemble what it originally looked like when its waters were thought to carry therapeutical properties, this picturesque anchorage surrounded by pine trees, provides both an archaeological site of remarkable interest as well as magnificent scenery ideal for swimming and relaxing. A popular cafeteria with refreshments and light snacks operates all day, while there is also a diving school on site for those interested in exploring its fascinating sea world. 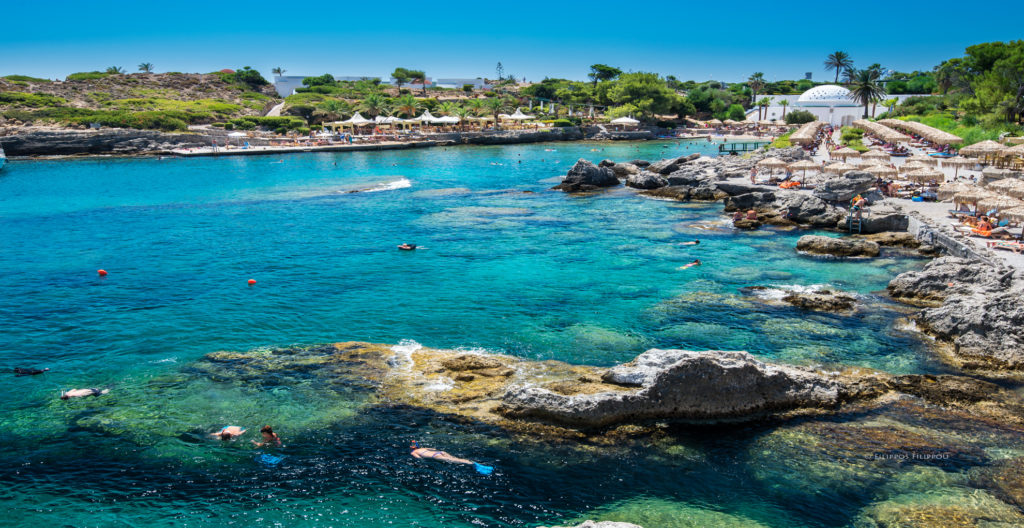 The panoramic view of the city of Rhodes and the Aegean Sea is simply breathtaking. Unbeatable for a romantic evening stroll, the sunset at Monte smith is probably as good as it gets. The view extends over the sea across to the Turkish coast.

The Green and beautifully laid out archaeological park contains the Hellenistic stadium, built in the 3rd century BC, where the Athletic events of the Aleia Games took place. 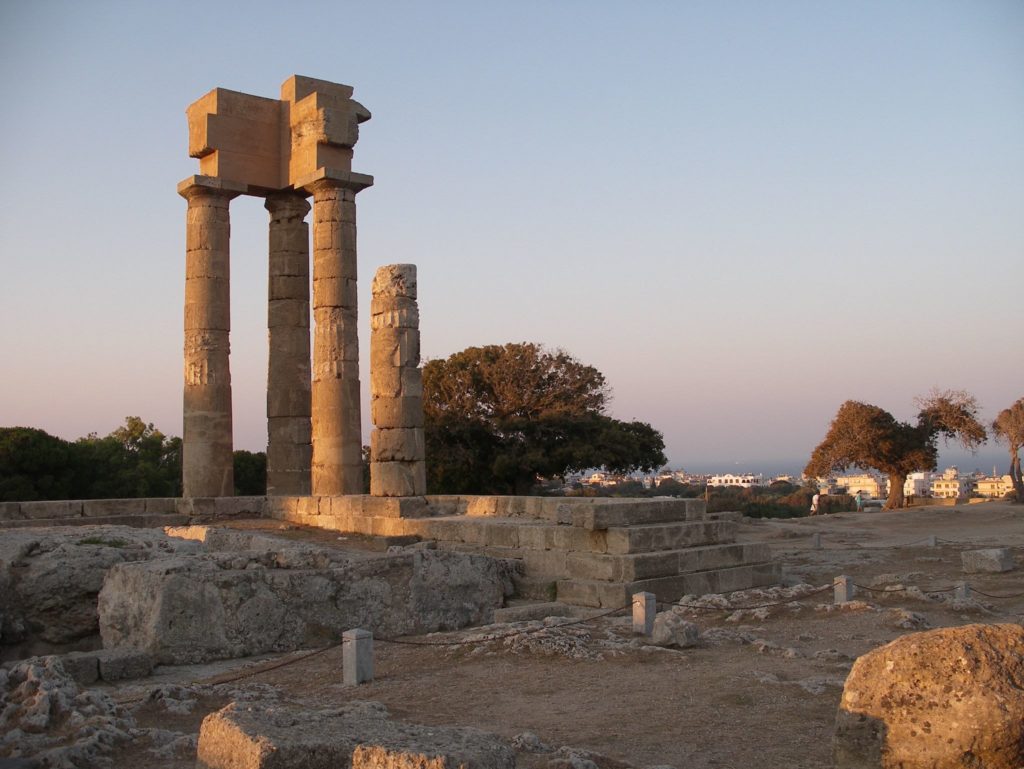 The lovely village of Lindos is one of the most attractive and beautiful villages of Rhodes, and is located south of the capital, on the eastern coast of the island, at a distance of only 14km from Lindos Breeze Beach Hotel. Beautiful scenery, a lively traditional village, colours and atmosphere of another era and traditional white houses in absolute semmetry attract thousands of visitors each year. The paths of the village are filled with fine restaurants, bars and interesting gift shops. Overlooking Lindos bay and the Aegean Sea stands the famous Acropolis of Lindos and the remains of Lyndia Athenas’ temple. 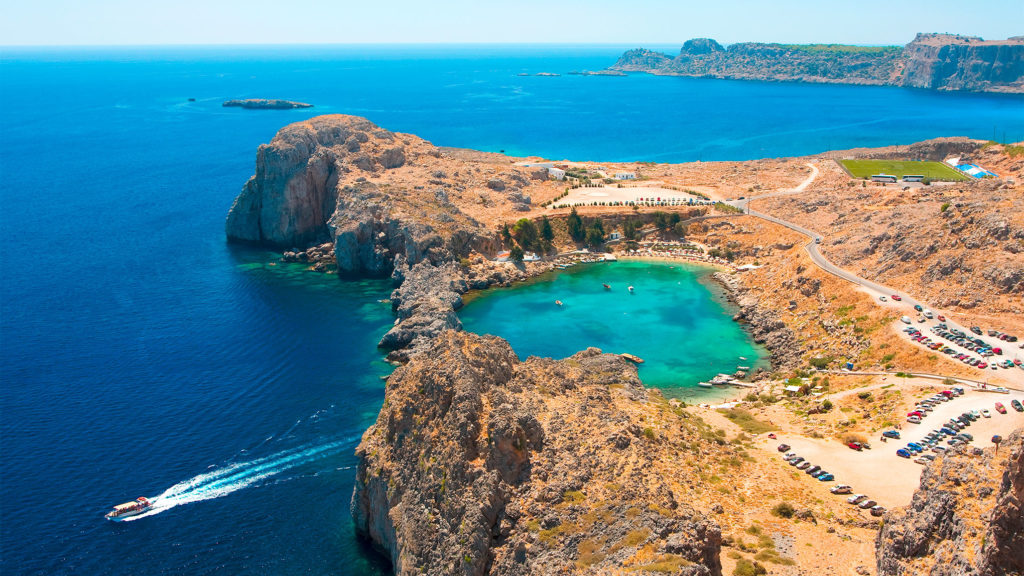 ‘’Epta piges’’ (seven springs) lies on the way to Archipolis Village. It is a valley flowing with clear springs and covered with enormous plane and pine trees. One of the most charming destinations on Rhodes, Seven Springs offers a cool, peaceful landscape, even in the heat of high summer, swamped in greenery.

Waters come out from the springs all year around to form a small lake accessible through a narrow tunnel of 186cm. Definitely recommended if visiting Rhodes during a heat wave. 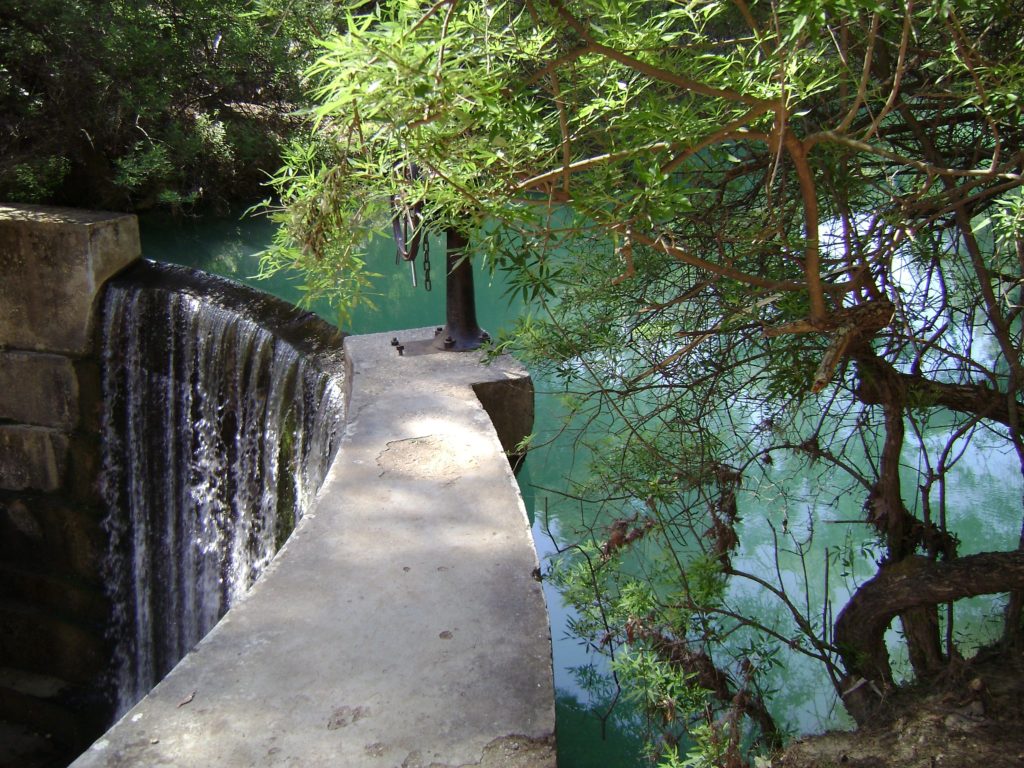 Filerimos is a hill 15 km away from Rhodes-town and around 65km from Lindos Breeze Beach hotel. The upper part of Filerimos is a large plateau and most of the buildings are found on the eastern side. They include the foundations of a temple, an Early Christian basilica and a Byzantine church which was destroyed during Turkish occupation and rebuilt by the Italians. A cobbled walkway leads you through the tree lined avenue to a large Cross where overwhelming panoramic views stretch out around your feet. 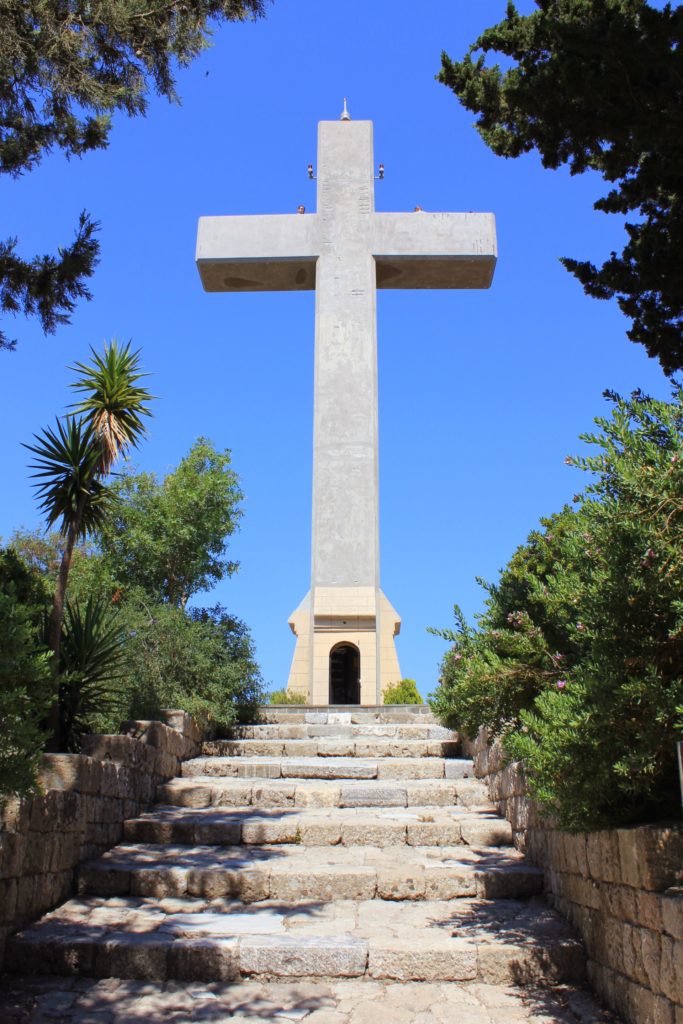 The east side of Rhodes (the side on which the Lindos Breeze Beach Hotel is located) generally hosts the best beaches on the island as it is generally more peaceful and the waters are usually calmer. We suggest you the following beaches:

The beach of Kalithea is a large beach with both pebbles and sand hosting a pleasant beach bar and is a popular choice for families, mostly Greeks. However, if you don’t mind rocky beaches, Tasos, Jordan and Nikos are three nearby bay’s of magnificent scenic beauty each with its own inviting tavern for traditional Greek food.

Afandou: Located around 35km northeast from Lindos Breeze Beach Hotel, Afandou beach is the longest beach on the island, and as a result, one of the less crowded ones. This well maintained pebbled beach is renowned for its crystal clear waters and the popular golf course nearby (Afandou Golf).

If you prefer sandy beaches, Tsampika’s golden beach and turquoise waters are definitely the best option on the island. The beach is very shallow for about 100m, and is recommended for water sports of all kinds. Nice scenery of the imposing rock of the Monastery of the Virgin of Tsampika, from which the beach has taken its name.

There is a good choice of water sports and beach tavernas. 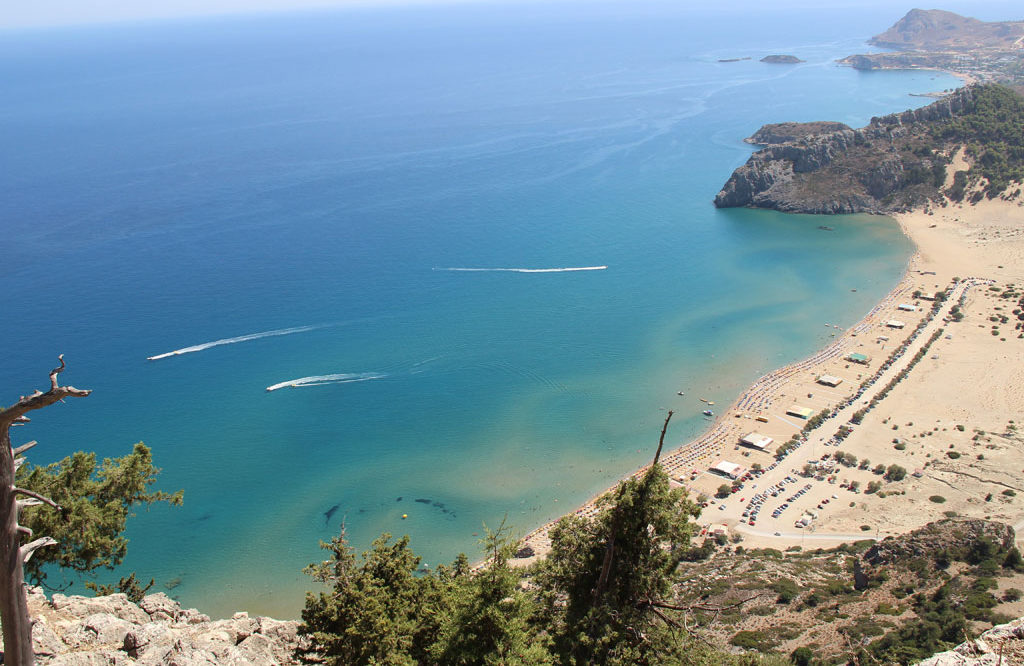 Just before Afandou beach, basically sharing the same bay, this beach is also formed by small pebbles and boarded by crystal clear water. There is a cave located on one of the beach’s extremities which really gives the entire place a magical surrounding. Local specialties are available at the fish tavern, and umbrellas and sun beds are available for hire. 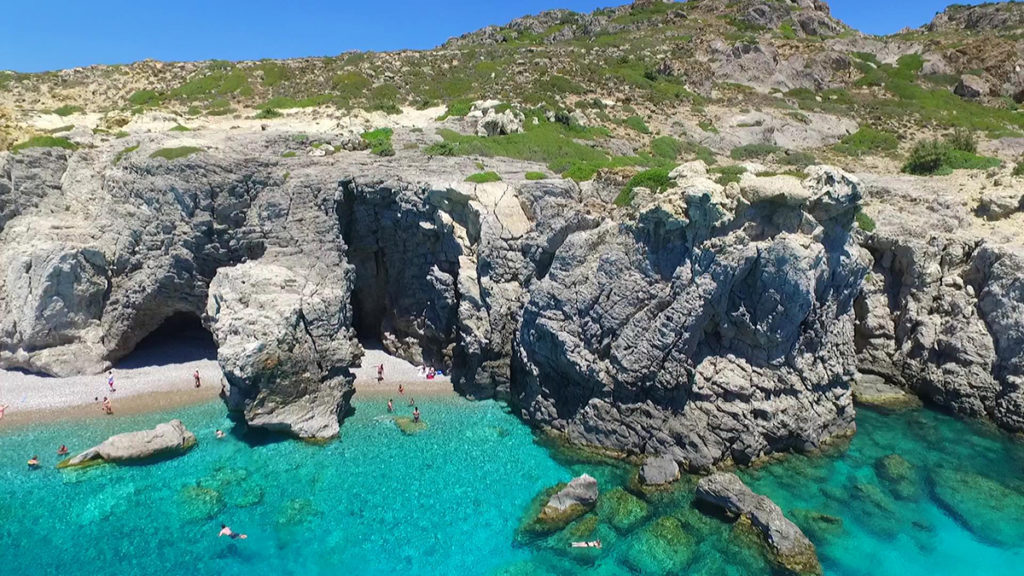 Located just 14km South of Rhodes city centre, Lindos is well known for its impressive scenic beauty. Lindos bay is overlooked by the Acropolis and is a friendly sandy beach ideal for relaxing and sunbathing. In addition, St Pauls bay (Ag. Pavlos) is a small rocky bay very close to Lindos town, ideal for snorkelling and sunbathing. There are two beaches, both relatively un-crowded and peaceful, one is a mix of natural sand and gravel, and the other is a manmade beach of golden sand.

Around 42km from Lindos Breeze Beach hotel, the beach of Faliraki is probably the most organised beach on the island. Water and extreme sports, shops and restaurants, golden sand and crystal clear waters welcome thousands of tourists all summer long. Especially popular to British tourists due to its vivid nightlife.

Haraki beach is set on a curved bay and is a mixture of shingle and sand. Perfectly clear water is excellent for swimming & snorkelling. Agathi beach, also known as the golden beach of Agathi, is a small sandy bay considered one of the very finest beaches on the island. 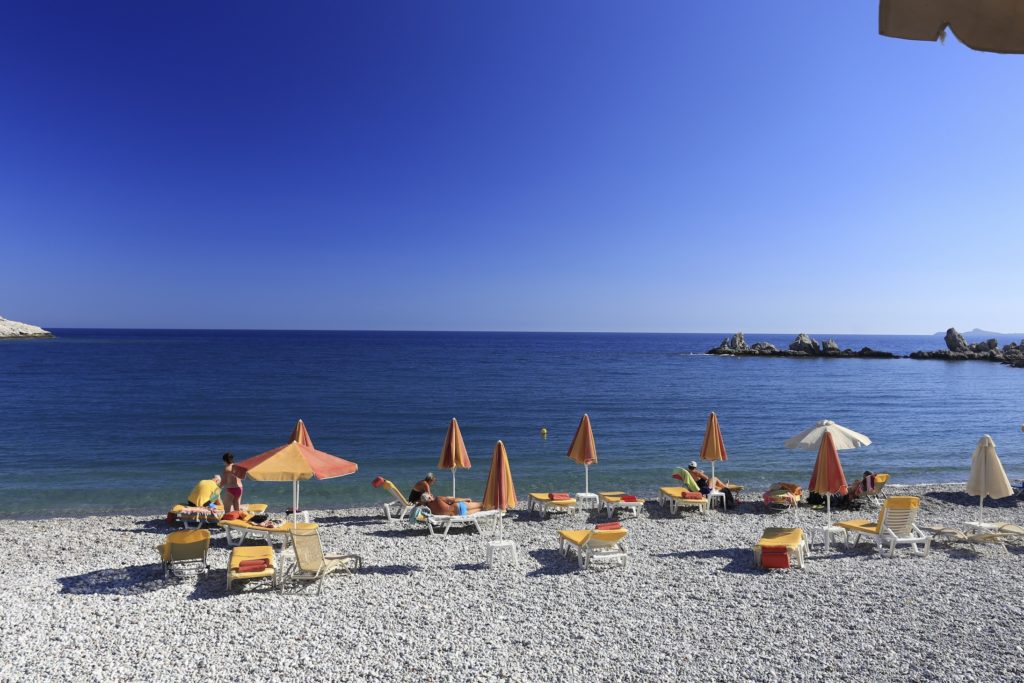 This long, sandy beach located just around 36km from Lindos Breeze Beach Hotel, and around 9 km/56 miles from the City of Rhodes. The beach is a paradise for surfers mostly during July and August. The water is crystal clear and the landscape is impressive. 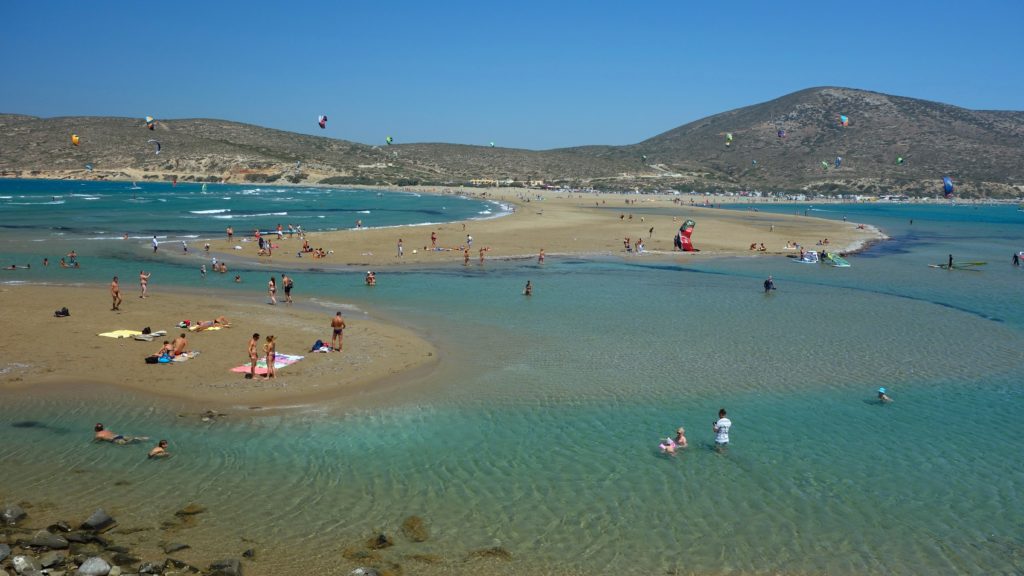